:: A NETWORK OF CHRISTIAN FELLOWSHIP FOR COMICS FANS, PROS, AND AMATEURS
Sort by
La vida cambia para todos, el Salvador vivió la más intensa vida de luchas y problemas, pero nos mostró el camino... a todos. The life change for everyone, the Savior lived into an intense battle and all kind of troubles, but he has shown us the way... to everyone.
Read more… Terrible Comics. Have you ever seen any? Of course you have. This is not going to be a rant on a comic I don't like. As a counter-proposal I would rather discuss the comics that I probably shouldn't like but love them anyway!
Read more… 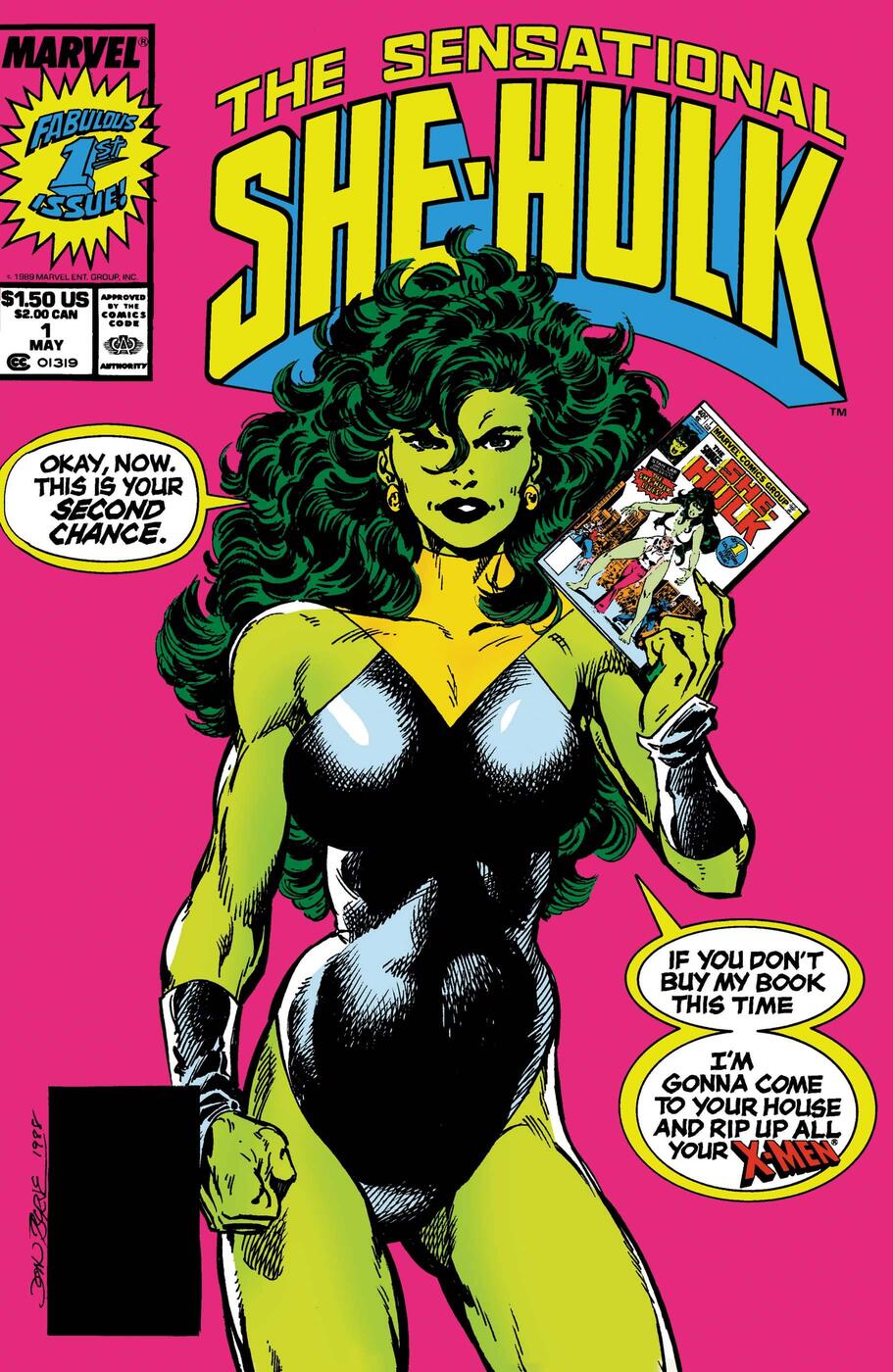 How do we inspire the creation of characters true to those they should represent? How would women in comics change if their stories were written by women? What can we do to change the mindset of women in comics? What are some of your favorite women in comics and why? (favorite characters, writers and artists) What is it in your life that you think you cannot accomplish? What do we (I) do now?
Read more… Hello! I'm Miranda_Artz. A freelance digital artist, animator, and comic creator. I work in a variety of artstyles ranging from cartoony to anime style. I have dabbled in Mavel/DC artstyles in the past and I have all kinds of artwork on my portfolio to look at. Check it out! 😁 https://www.mirandaartz.com/portfolio if you'd like to see reviews from people who have hired me in the past please visit: https://www.fiverr.com/mirandaartz 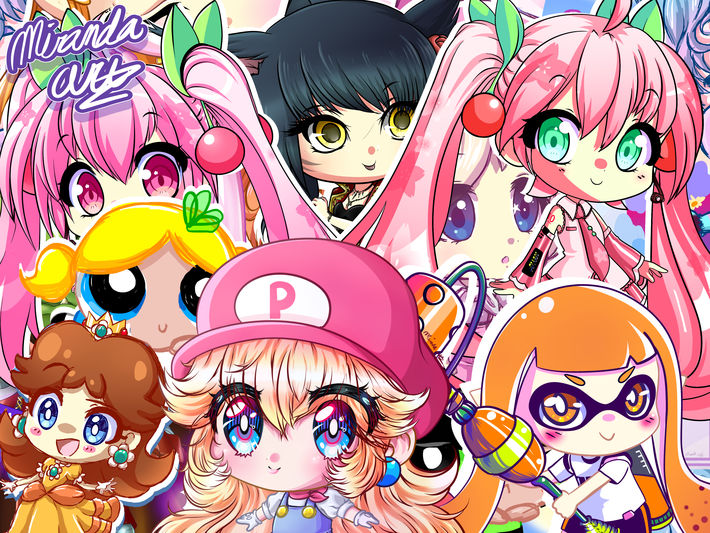 When Covid19 lockdown started in March last year (in Australia), Daz and I started creating this SAMSON comic together. We agreed to do an 8-page mini comic and make it as awesome as we could, just for fun. We also decided to make it mature, as in for teenagers and adults, not kids. Pretty soon we agreed it needed to be at least 12 pages. 6 months later the art was getting attention, and we expanded it to 16 pages. Now it's 20 pages, we also have a statue designed 🤯 and there's posters on the way.

Here's possibly my favourite page in the comic; where Samson goes nuts against hundreds of enemy soldiers, with just the jawbone of a donkey. We spent AGES trying to make this page look cool. Want to read it and see ALL the art? You can get either digital or print versions here at Terminus Media:
www.terminusmedia.com/samson

Hope you like the illustration! And I appreciate your support!

P.S. Please let me know in the comments if you buy a copy as a result of seeing this, I'm just interested to know how many followers of my art here will actually support my work

Season 1 of Falcon and the Winter Soldier is officially done....what did everyone think? (Without spoilers!)

Did it live up to your expectations? Better? Worse?

Read more…
Aww... Martin is a little sweet on Chelsea, even though she did rough him up a bit. So much for the "damsel in distress" cliche.
Hope deferred makes the heart sick, but when longing is fulfilled, it is a tree of life. Proverbs 13:12 WMB
Follow the comics at http://spiritmancomics.com I'm a little late on sharing this but Ultimate Millennium #1 is available now!

A couple weeks ago I uploaded an update that it was off to be printed, and since I've obtained the copies ready to be distributed! You can acquire one via messaging me through here or through Instagram, or at your local comic shop!

Visit my instagram page @ryderlcomics to see which stores carry it! (Under the highlight UM #1)

Thank you guys for the support and for your patience!

Read more…
Spiritual realities once concealed have been opened to Chelsea. It's too much and she's out of there. What are the implications for us as we seek God?
Return to the One against whom you have so blatantly rebelled, O children of Israel. For on that day, every one of you will reject the idols of silver and gold that your own hands have sinfully made. Isaiah 6:6-7 WMB
Follow the comics at http://spiritmancomics.com Read more…
Spiritman has been engaged in spiritual combat with ugly demonic beings that emerged from the fog. He has beaten them back but then a seemingly human person emerges and stares at Chelsea. What should Spiritman do with this?
Beware of false prophets, who come to you in sheep’s clothing, but inwardly are ravening wolves. Matthew 7:15 WMB
Follow the comics at http://spiritmancomics.com Read more…
The mysterious being that stepped from the fog... a prophetess?.. is looking right at Chelsea. Does Chelsea even know why she is being watched? I doubt it.
They have now surrounded us in our steps. They set their eyes to cast us down to the earth. Psalm 17:11 WMB
Follow the comics at http://spiritmancomics.com Read more…
Spiritman has been battling demons that emerged from the fog but now a human emerges. What does that mean? I am as excited as you are to learn the answer.
The angel said to me, “Why do you wonder? I will tell you the mystery of the woman and of the beast that carries her, which has the seven heads and the ten horns. Revelation 17:7 WMB
Follow the comics at http://spiritmancomics.com Read more…
What does it mean to be human? That's a big question. I can only offer a small part of the answer.
So, then, my beloved brothers, let every man be swift to hear, slow to speak, and slow to anger; for the anger of man doesn’t produce the righteousness of God. Jacob (James) 1:19-20 WMB
Follow the comics at http://spiritmancomics.com 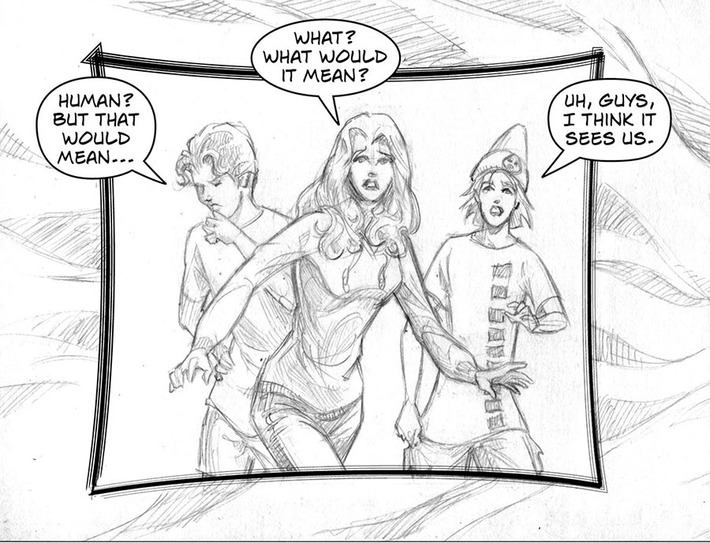 Read more…
Out of the fog. We finally get to see what Martin, Chelsea, and Cameron are seeing. Still not sure what it is. Just remember the setting is still in Martin's bedroom... weird.
Got to tell you about a wonderful podcast produced by the author of Spiritman, Scott A. Snyder and his nephew Brad. The podcast is called "Not About Us." They are doing deep dives into the scriptures, currently looking at Genesis and Revelation. It is fun to hear them marvel in wonder at the greatness of God's word. Definitely worth your time. You can find them on iTunes or at their website... https://www.notaboutusstudies.com
To him who loves us, and washed us from our sins by his blood— and he made us to be a Kingdom, priests to his God and Father—to him be the glory and the dominion forever and ever. Amen.
Revelation 1:5b-6 WMB Read more…
So, it’s been awhile. Circumstances have pulled me away from working on Spiritman as much as I would like. I started a new job. Then almost immediately I was hospitalized twice in a single month. Fortunately I still have a job and my health has improved. I am only sharing this with you because I want to say how great God is, and I miss doing that through my Spiritman postings.
Since the idea of a daily posting no longer makes sense I will start calling these things The Spiritman Update. Please know that I appreciate you for following the Daily Dose and look forward to a more regular, if not daily, posting of Spiritman. I am currently in the middle of drawing issue 4. Issue 5 has been written so there are many great things waiting to be shared.
Behold, God is great, and we don’t know him.
The number of his years is unsearchable.
Job 36:26 WMB 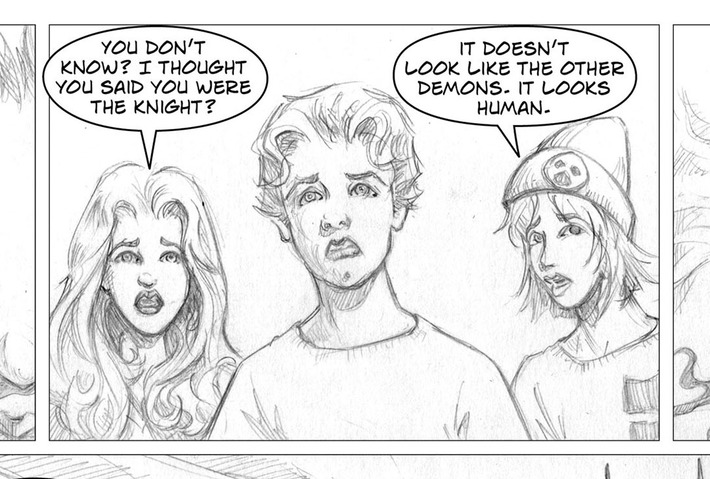 Read more…
Martin is looking right at a figure emerging from the fog. Still he does not know what he is seeing. Will you know when you see it?
"but how he now sees, we don’t know; or who opened his eyes, we don’t know. He is of age. Ask him. He will speak for himself." John 9:21 WMB
Read the whole story at http://gorillaheadcomics.com 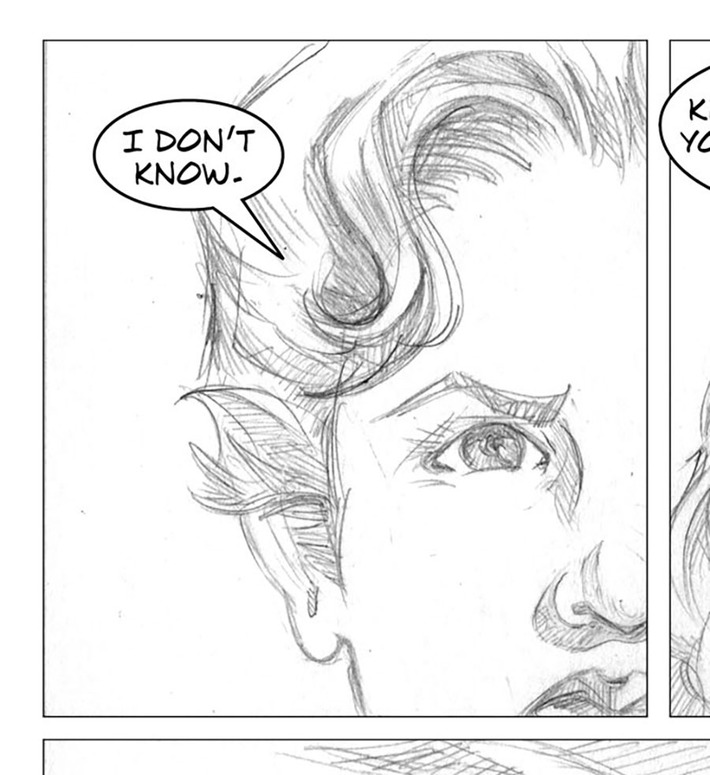 Read more…
A figure emerges from the fog... in Martin's bedroom... weird.
"For now we see in a mirror, dimly, but then face to face. Now I know in part, but then I will know fully, even as I was also fully known." 1 Corinthians 13:12 WMB
Read the whole story at http://gorillaheadcomics.com 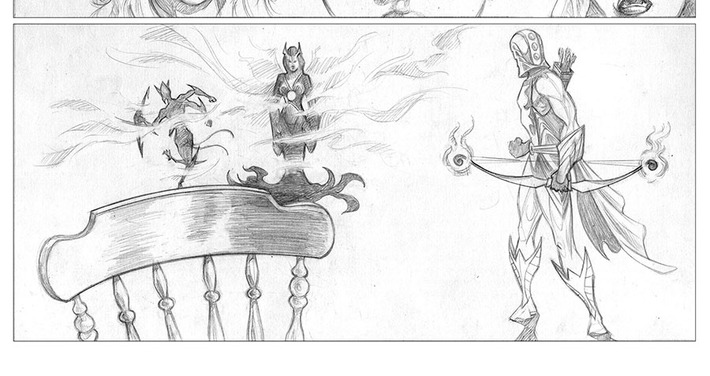 Read more…
They are seeing something in the fog but what are you seeing?
"When the woman saw that she was not hidden, she came trembling, and falling down before him declared to him in the presence of all the people the reason why she had touched him, and how she was healed immediately." Luke 8:47 WMB
Read the whole story at http://gorillaheadcomics.com

Read more…
Spiritman shoots first... but an unexpected force bubble stops his arrow. Where did that come from?
"So be careful, or your hearts will be loaded down with carousing, drunkenness, and cares of this life, and that day will come on you suddenly." Luke 21:34 WMB
Read the whole story at http://gorillaheadcomics.com 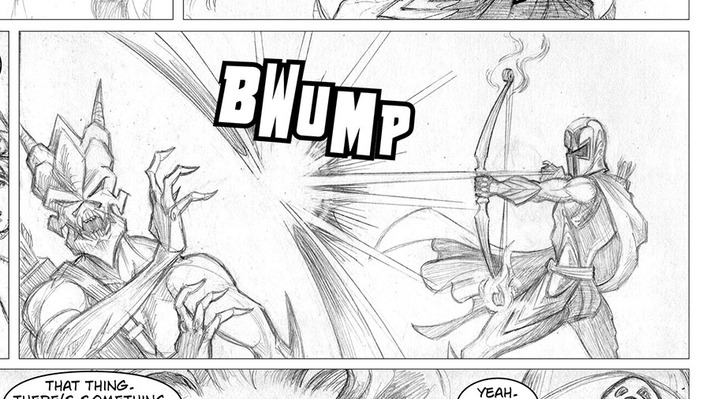 Read more…
The spiritual battle that has been raging simultaneously with the conversation in Martin's room has been revealed. Now Cameron sees something new. What is it?
"but I see a different law in my members, warring against the law of my mind, and bringing me into captivity under the law of sin which is in my members. What a wretched man I am! Who will deliver me out of the body of this death?" Romans 7:23-24 WMB
Read the whole story at http://gorillaheadcomics.com 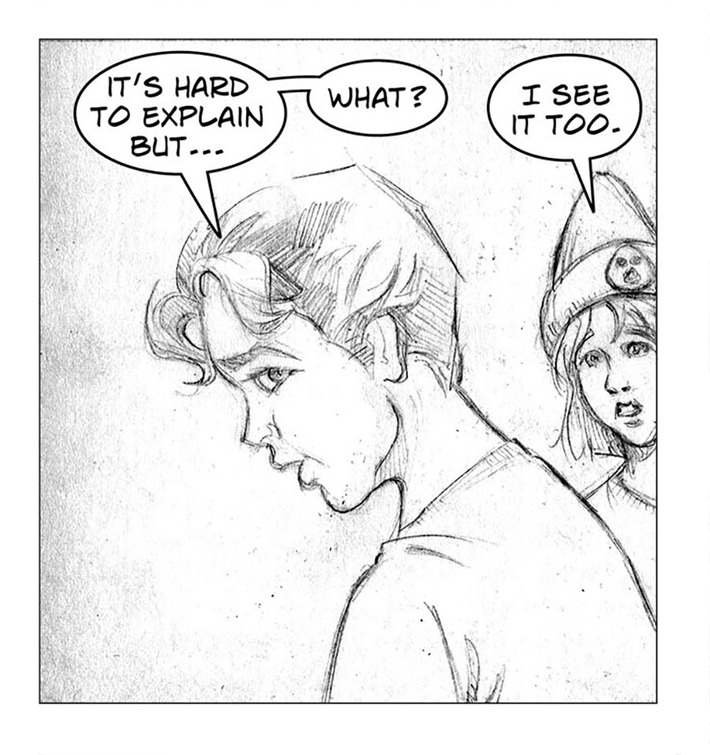