Hello my name is Sven Jacobs, CCAS regular and comic strip artist and writer. If you've been praying for a funky fresh and hip Christian comic strip competition, consider your prayers answered! Now, for the first time ever, you can be a part of Sven Jacob's Christian Comic Competition going on for the next three weeks.

BUT SVEN, WHAT COULD I WIN IF I PARTICIPATE?!?

No doubt you are saying to yourself, aside from the obvious spiritual and internal satisfaction and rewards for participating in such a prestigious venture, what else do I have to gain? Well, I am excited to announce that you could win a trophy... in a graphical JPEG format! Tangible gold trophies can break or be melted down during hard economic times, but a standard JPEG file can stand the test of time! 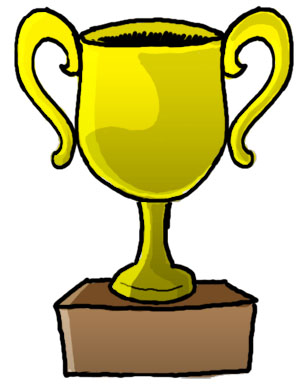 Look at those gradients and bold lines, which say to anyone you show your trophy to "HEY LOOK AT THIS GUY/GIRL, HE OR SHE IS A REAL WINNER!" Second and third place winners could receive a silver and copper trophy too (I KNOW IT IS JUST TOO MUCH!), with a plate that has their name! And hey, what better accomplishment to put on your resume or illustration portfolio than your winning this fine and impeccable award! You will be the bell of the ball!

OKAY THEN WHAT IS THE CONTEST?!?

Nothing can invoke the spirit of community and union than popculture references pointing back to some show or movie from one's youth. This is why television shows that parody such things, like Family Guy or Southpark, are so successful. It is why Chris Rice's otherwise horrible song "What if Cartoon Characters were Saved" was worthy of covers from teenaged girls. Who doesn't remember Doug Funny attempting to woo Patty Mayonnaise, or Bugs Bunny putting fertilizer on Elmer Fudd's head promptly before a flower sprouted from it, or a gaggle of adolescent mutant turtles fighting evil while eating pizza?

The competition requires you to create a Christian comic using characters from a cartoon that is not your own. What if the smurfs had a philosophical conversation about Jesus? What if Scrooge McDuck rejected the cross for the sake of his money. What if Garfield met a Jehovah's Witness? Whatever. Just an awesome fan strip... whether it be one panel or 60, colored or (if you are as lazy as I am) merely lineart... spotlighting a famous or infamous cartoon character.

Post your submissions to this blog post so that nostalgia reigns while everyone comments on your awesome strip. Judging will be based on a meticulous and complex mathematical formula involving various painstaking criterion (I will pick what I like most), but should involve a cartoon character that is not your own and Christianity/Christ. Submissions will be due February 11th.