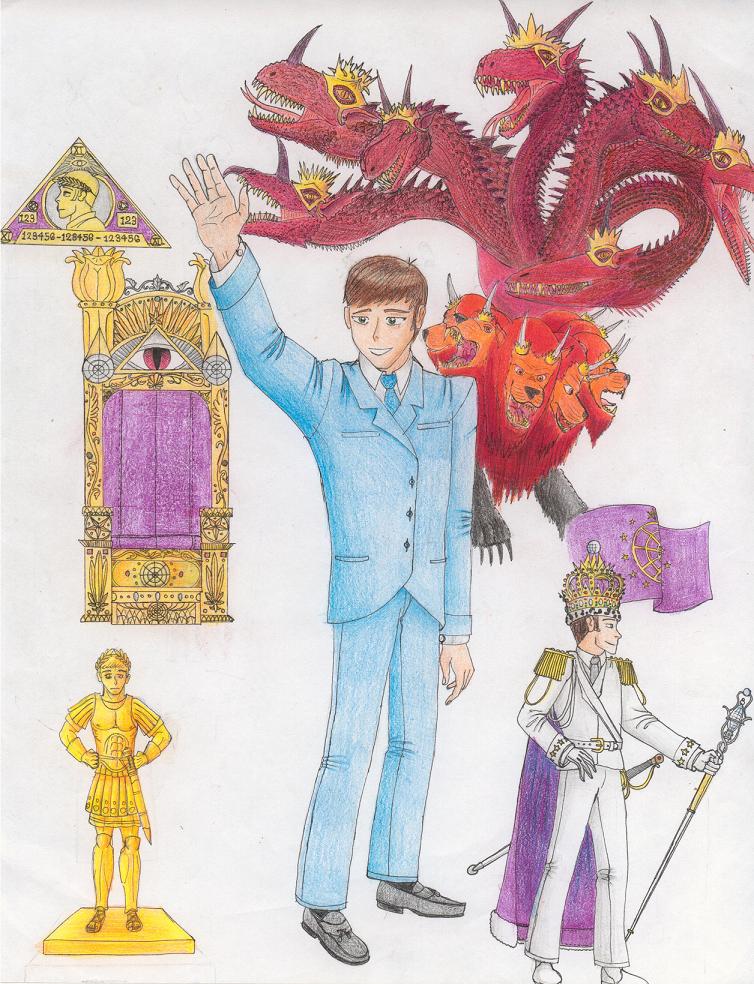 This guy is the main antagonist of the The Last Days manga. He's the Anti-Christ.

Little is known about Nero Mancusos' past other than he was the son of a wealthy Italian merchant in Rome, Italy and briefly served as a government official in Rome and a representative in the European Union up until the Rapture when millions of people worldwide vanished into thin air. After the Rapture Mancuso and others were elected to aid in the creation of a global government in an effort to bring stability, unity, and order to a world now in chaos. After it's creation this new world government was named the Global Community and it's creator, Nero Mancuso, was elected as the Supreme Chancellor of the GC. Afterwards he divide the world up into ten regions, each region ruled by a sub chancellor. He also manages to broker a treaty with Israel that was to last for seven years. This treaty also started the Tribulation, which will also last seven years. During those seven years he will declare war on North America, South America and Australia(all of whom attempted to sucede from the GC) instigate a famine in these regions, persecute, imprison and execute millions of political dissidents(the majority of whom were tribulation saints)kills the Two Witnesses at the Wailing Wall and he will eventually be assassinated in Jerusalem only to be resurrected by Satan as the Anti-Christ. After his 'resurrection' the world comes to believe that Nero Mancuso is God and will begin to worship him. At the midpoint of the Tribulation he will break the treaty he made with Israel by desecrating the Temple by sacrificing a pig on the alter, declaring himself God in the Holy of Holies and setting up an idol of himself in the Temple. The Jews, enraged by this sacrelige, threaten to revolt but instead will flee to Petra. Mancuso then tries without success to destroy the Jews at Petra. He also orders everyone in the world recieve a mark of loyalty on their foreheads or right hand or be put to death. He will eventually call the whole world to gather for war against Israel near the end of the Tribulation in order to wipe out the Jewish people, the tribulation saints and Israel, but he will be defeated at Meggido by Christ Himself as He returns to set up His Kingdom on earth. After his defeat, Mancuso is cast into the Lake of Fire.

Even before he becomes the Anti-Christ Nero Mancuso was a wolf in sheeps clothing from the very beginning. Charming, charismatic, handsome, persuasive, clever, an excellent orator, confident and captivating Mancuso possesses an almost supernatural ability to influence, captivate and persuade others to follow him. A gifted speaker and able speak multiple languages with such fluency and charisma and charm that almost anyone who listens to him seems to fall under his spell through his hypnotic words. This is main reason he was elected to create, and eventually run, the Global Community and managed to broker a treaty with Israel. It could be said that he charmed his way into power. In reality he's a liar, deciever, manipulator, megalomaniac, greedy, and selfish. Though he comes across as someone who's selfless and cares deeply about the plight of the world he doesn't care about anyone but himself. Though he comes across as a pacifist and someone who is opposed to the use violence he will eagerly use violence to suppress any and all opposition to his reign. Though he comes across as a liberator he is a despot who has enslaved the world.

After he is resurrected by Satan as the Anti-Christ, Mancuso begans to take on a truely satanic personality and supernatural powers such as performing counterfeit miracles to further decieve the masses into believing he is God.

Tags: the last days, characters, days, last, the
E-mail me when people leave their comments –
Follow